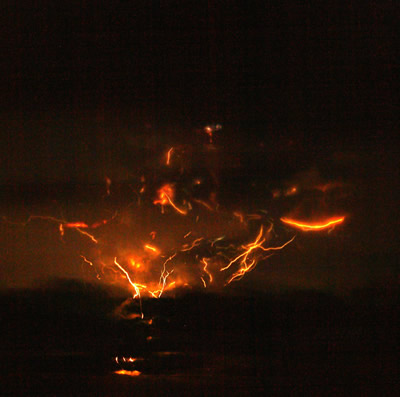 When Alaska's Redoubt Volcano started rumbling in January, a team of researchers set up a series of the arrays near the volcano. When the volcano erupted on March 22 and 23, 2009, the arrays collected  information about the lightning produced in the volcanic plumes.

Redoubt was "a perfect laboratory," said physicist Paul Krehbiel of New Mexico Tech. "It erupted on schedule--and gave us two months' notice." Because of this advance notice, scientists were able to set up the sensors before the eruptions, and because of this scientists are going to be able to learn a lot about electrical charges and lightning in volcanic plumes.

This drawing shows another way that islands are made. A rising hot bubble of material finds it's way into the crust of the Earth from the deep interior, and begins to erupt. This bubble or "plume" is called...more

Scientists have observed that in some volcanic eruptions, a rotating, column of dust and gas forms and causes the volcanic plume to rotate on its axis. This rotation causes the formation of lightning and...more