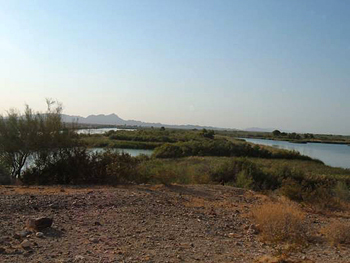 The Colorado River (U.S.) is among rivers worldwide that have been affected by a warming Earth.
Click on image for full size
Courtesy of U.S. Geological Survey

Less water is now flowing in some of the worlds largest rivers.

A team of scientists studied hundreds of the Earths largest rivers. They looked at how much water has been flowing in rivers over the past 50 years. These rivers hold about three-quarters of all the water flowing through rivers worldwide.

The scientists found that rivers have less water in some places and more water in other places. Most of the rivers that have less water are in areas where large numbers of people live. This could mean that there will be less food and water for people living in those regions.

The scientists also found that there is now more water flowing in rivers in the Arctic where snow and ice are melting as the planet warms.

The scientists found that less water in rivers is probably due to global climate change. Climate change is causing amounts of precipitation to change in different regions of the world. Warmer temperatures are also increasing the amount of evaporation.