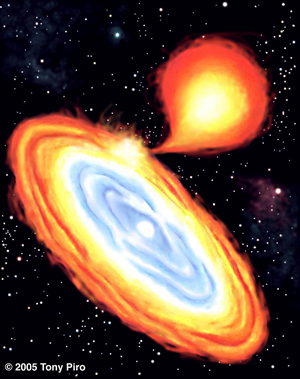 Sometimes stars explode. This is called a supernova. From Earth, astronomers use telescopes to watch the bright flash of light from exploding stars in far-away galaxies.

But recently, while watching the sky, they saw an explosion that was not like an ordinary exploding star.

The light coming from the explosion was different. It was much less bright than a typical supernova and was three to four times faster, lasting only about 20 days.

This may not be a supernova at all. Two white dwarf stars orbiting around each other may have caused it.

White dwarfs are very dense. They have the mass of a large star packed into a small space roughly the size of Earth. When two white dwarfs orbit close together, a thick layer of helium to build up. That helium can explode, which is what scientists suspect happened during this event.

Would it be more difficult to pull an elephant or a mouse? If you pulled each animal the same amount, the mouse would come towards you but the elephant would not move at all, even if he didnt try to...more