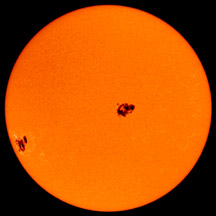 NASA's SOHO spacecraft has lots of pictures of the Sun right now!

Two very large groups of sunspots have appeared on the Sun. Each of the groups is about as big as the planet Jupiter, which is the largest planet in our Solar System! Sunspots are places on the Sun where the Sun's magnetic field is all tangled up. These tangled magnetic fields create storms called solar flares and CMEs. Some storms from these two big sunspot groups reached Earth on Friday, 24 October 2003.

When a space weather storm like this reaches Earth, the radiation from the storm can cause problems. The storm can damage satellites and might even make the electricity go out. Don't worry, though - Earth's magnetic field does a pretty good job of protecting us from the radiation. The storms also have a good side - they create the Northern Lights!