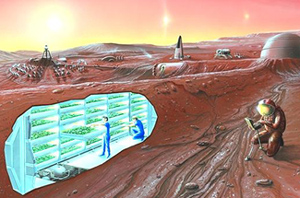 Four people have volunteered to live in a 20-foot chamber for 90 days. That's a long time to stay in such a small place! They will be living there as part of the Lunar-Mars Life Support Test Project.

The crew of four will live in the air-tight chamber through late December. This is a test so that scientists will know whether or not we are ready to go build a colony on the Moon or on Mars.

Inside the crew's chamber is everything that is needed for the 4 crew members to live for the 90 days. During their confinement, the crew will run 14 tests. These include medical exams for the crew and evaulations of how well the chamber supports life (including how good the food is!).