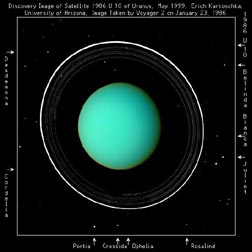 A new moon has been found around Uranus! That makes a total of 18 moons for the seventh planet.

The moon was found in an image from Voyager 2 taken in 1986. It took 13 years before a scientist saw the moon. That's a really long time!