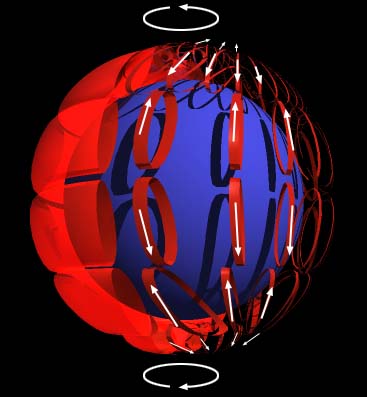 This is a drawing showing the earth's atmosphere going around.

Motions in the interior of a planet help carry heat from the inside to the outside of the planet.

The drawing shows a kind of movement that is usual in the atmosphere as well as the inside of a planet. Material moves the way water does in a pot that is boiling. In the drawing, there are three different red sheets of activity where the air is turning over.

In the interior of Jupiter, the liquid layers are warm enough to move this way. Motions like this in the liquid metallic hydrogen layer inside Jupiter cause the big magnetosphere of Jupiter.

How Jupiter's Magnetosphere is made

A Look at the Inside of Jupiter

The Giant planets do not have the same kind of layers inside that the earth-like planets do. The history of the giant planets was so different that they formed with much more gas on the inside. Jupiter...more

Heat from Inside Jupiter

Have you ever thought that a planet could make energy within itself? If you think about it, the ground is not very cold at all (except in the winter). This means that the Earth makes enough energy for...more

Motions in the interior of a planet help carry heat from the inside to the outside of the planet. The drawing shows a kind of movement that is usual in the atmosphere as well as the inside of a planet....more

Where to find Jupiter's Clouds

There are three different layer of clouds in Jupiter's atmosphere, as shown in this picture. The clouds are made of complex molecules such as water. Another molecule which the Jupiter clouds are made of...more