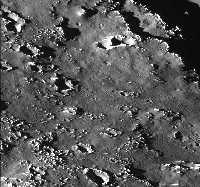 This is an image of the surface of Callisto.
Click on image for full size
Image from: NASA's Galileo spacecraft

Does Callisto have a Surface in Motion?

No signs of surface movements have been seen on the surface of Callisto!

The surface of Callisto was carefully examined for signs of the kind of pushing and shoving which the crust of the Earth has undergone through time, and nothing has been found so far.

This type of surface is certainly different from either that ofGanymede or Europa. (The other major moon of Jupiter, Io has many volcanoes.)

The difference may have to do with the lack of heat inside of Callisto.

The surface of Callisto is deeply marked with craters. Craters are the little white marks in the picture. It looks like it might be the most heavily cratered body in the whole solar system. And some of...more

Many different types of surface are shown in this picture. In the front is a huge crater, which goes for a long way over the surface. This crater could be compared to that of Mimas. They both show that...more