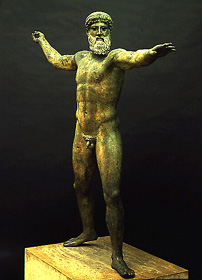 Poseidon was the Greek god of the sea and earthquakes. Poseidon was depicted as a bearded man with long hair, holding a trident and accompanied by dolphins and fish. He had the reputation for having a very bad temper. The symbol of Poseidon's power was the three pronged spear known as the trident.

The storms and earthquakes were a reflection of his furious rage. When he was angry, he split mountains and threw them into the sea to make islands. Poseidon was the brother of Zeus and Hades. He married Amphitrite who was one of his attendants, the Nereids. The Greek god Poseidon was known to the Romans with the name of Neptune.

In Greek mythology, Andromeda was the daughter of Cassiopeia and Cepheus, the king of Ethiopia. Andromeda's mother claimed that they were more beautiful than the sea nymphs, the Nereids. The Nereids felt...more

Many features of the Earth are named after mythological figures. An example is the story of Galatea's love for a young beautiful shepherd called Acis. He was the son of Pan.Galatea lived in the sea surrounding...more

The ancient Greeks saw the figure of the Greek myth Orion in the nighttime sky. There are several different stories about the birth of Orion. According to one version of the myth, Orion was the son of...more