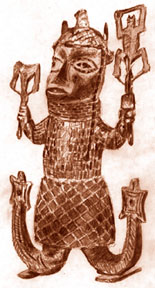 Olokun, the sea god of the Yoruba people, lives in a palace under the sea, with human and fish attendants. His name means "owner of the sea". Once, Olokun challenged the sky god, Olorun. The winner would be the god with the finest clothes.

The people would decide the winner. Olorun sent his attendant, Chameleon to compete with Olokun. Chameleon matched whatever Olokun wore. Olokun finally gave up the challenge, and Olorun was declared the winner.