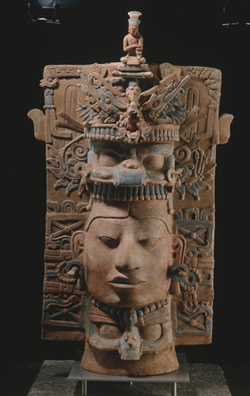 This picture shows a Mayan incense burner that has a face carved on it. It was made by the Maya people over 1200 years ago and was found in Palenque, Chiapas, Mexico.
Click on image for full size
Museo de Sitio de Palenque Dr. Alberto Ruz LHuillier  INAH, Mexico and the National Gallery of Art

Mayans were sophisticated observers of the sky. Mayans used their astronomical knowledge to predict future human events. They were aware of the movements of Mars. In one of the ancient Mayan books, Mars is represented by a long-nosed beast.
Last modified January 23, 2004 by Lisa Gardiner.