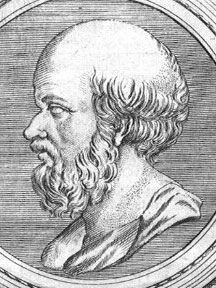 Eratosthenes was a Greek scientist. He lived from 276 to 194 BC. He studied astronomy, geography, and math. He is famous for making the first good measurement of the size of the Earth.
Click on image for full size
Public domain image.

Eratosthenes was a Greek scientist. He lived from 276 to 194 B.C. He studied astronomy, geography, and math. Eratosthenes is famous for making the first good measurement of the size of the Earth. He lived, for most of his life, in the city of Alexandria in Egypt.

Eratosthenes was born in 276 B.C. in the city of Cyrene. He studied for a few years in Athens. Later, he studied and spent most of his adult life in Alexandria. He died in Alexandria in 194 B.C. He was 82 years. He never married.

Eratosthenes is most famous for making the first good measurement of the size of Earth. He did that sometime around 240 B.C. He knew that there was no shadow at the bottom of a well in the town of Syene on the summer solstice. That meant that the Sun must be straight overhead in Syene on that day. He measured the length of the shadow of a tall tower in Alexandria on the same day. He also measured the distance between Syene and Alexandria. He used that information to calculate the circumference of the Earth. We aren't quite sure what his answer really was. That's because we don't know the exact length the distance units he used (called "stadia"). He may have gotten it right to within 1%, or he may have been off by about 16%. Either way, his answer was pretty good... and he was the first person to make a good measurement of the size of Earth!

The Library of Alexandria was very famous library in ancient times. Eratosthenes became the head librarian there in 236 B.C. Besides figuring out the size of the Earth, Eratosthenes made several other important inventions and discoveries. He invented an easy way for finding out prime numbers. That math method is now called the Sieve of Eratosthenes. He made a map of the "whole world". Actually, the map only showed the parts of the world that the Greeks at the time knew about; but it was one of the best maps of its time. Eratosthenes also invented a mechanical device that astronomers used for many years to figure out where the stars were in the sky how they appeared to move (as the Earth turns). That device was called the armillary sphere. Eratosthenes also made a catalog of stars that had 675 stars listed in it.

Archimedes was a Greek mathematician and engineer who lived between 287-212 B.C. His greatest contributions are in the field of geometry, where he did much work with circles and their properties. Legend...more

Aristotle was a Greek philosopher who lived between 384-322 B.C. He was one of the greatest thinkers of the world and wrote on every major area of thought. Aristotle thought that the Earth was at the...more

Democritus was a Greek philosopher who lived between 470-380 B.C. He believed that everything in the universe was made up of tiny, indestructible particles called atoms. Democritus had many remarkable...more

Eratosthenes was a Greek scientist. He lived from 276 to 194 B.C. He studied astronomy, geography, and math. Eratosthenes is famous for making the first good measurement of the size of the Earth. He lived,...more

Plato was a Greek philosopher who lived between 427-327 B.C. He founded the Academy in Athens, a school which made many important scientific discoveries in ancient times. Plato believed that knowledge...more

Ptolemy was a Greek astronomer who lived between 85-165 A.D. He put together his own ideas with those of Aristotle and Hipparchus and formed a unified model of the universe. Ptolemy believed that the...more