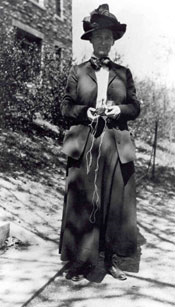 Florence Bascom, who lived from 1862 until 1945, was one of the most important geologists in the United States. She studied mineral crystals by looking at them very closely with a microscope. She also studied metamorphic rocks and how mountains form.

Florence started teaching geology at Bryn Mawr, a womens college, in 1895. She collected minerals, rocks, and fossils for the college and taught hundreds of students over the years. Many of her students became successful geologists just like she did!

Sometimes rocks are metamorphosed over large areas that are the size of many states or even several countries. This is called regional metamorphism. How could this happen? What force has the power to...more

Geology is the study of rocks and geologists are the people who study them! There are many different types of geologists. Mineralogists study minerals. Petrologist study rocks. Structural geologist study...more

Florence Bascom, who lived from 1862 until 1945, was one of the most important geologists in the United States. She studied mineral crystals by looking at them very closely with a microscope. She also...more

Niels Bohr was a Danish physicist who lived between 1885-1962. He studied the structure of atoms and developed a new theory about how the electrons in an atom were arranged. After helping build the first...more

Marie Curie was a physicist and chemist who lived between 1867-1934. She studied radioactivity and the effects of x-rays. She was born Maria Skłodowska in Warsaw, Poland. Women could not study then...more

Albert Einstein was a German physicist who lived between 1879-1955. He is probably the most well-known scientist in recent history. Have you heard of Einstein's famous theory? It is called the theory...more

Robert Goddard was an American physicist who lived between 1882-1945. He studied rockets and showed how they could be used to travel into outer space and to the Moon. Goddard experimented with different...more