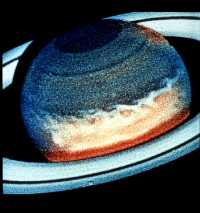 This image of Saturn makes use of false color to show the cloud pattern. The clouds form in bands which move across the disk of Saturn. The banded pattern of clouds, or stripes, is similar to those found on all the giant planets, particularly in Jupiter's belts and zones. The similarity among all the giant planets, even Uranus, suggests that there may be a common way this pattern is created.

The clouds on Uranus, like Jupiter, are divided into stripes. On Uranus the stripes are hard to find. The left picture shows the north pole of Uranus. In this picture only the smog can be seen. The clouds,...more

A Look at Saturn's Atmosphere

The clouds of Saturn are much less colorful than those of Jupiter. This is because Saturn's atmosphere is made of more sulfur. Sulfur makes Saturn look yellow. The atmosphere of Saturn, like Jupiter, is...more

Astronomers have discovered a strange shape in Saturn's atmosphere. The shape is a hexagon. The hexagon is near Saturn's North Pole. Scientists aren't quite sure why Saturn has the hexagon shape in its...more

An Overview of Motions in Saturn's Atmosphere

The position of Saturn when gas changed to ice