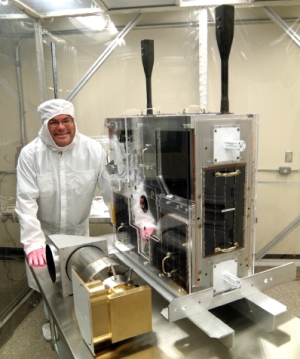 MOST is Canada's first space telescope. It is the size of a suitcase. It was launched in 2003 on an old missile. Under a treaty the missile had to be taken apart. So they used it for science!

MOST has a 6-inch mirror and a digital camera. The camera takes images of pulsating stars. This records the amount of light over time. The images teach us about the insides of stars.

We control MOST with small radio dishes. It is smaller than the Hubble Space Telescope. They call MOST the "humble space telescope". It may be small, but it makes big discoveries! Visit the MOST website for more.