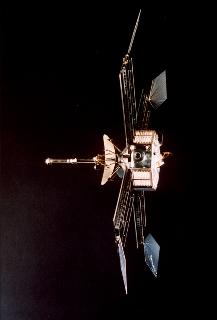 Mariner 2, launched in 1962, was the first spacecraft to go to Venus, sending back information on its high surface temperature. The fifth Mariner mission also visited Venus and performed experiments on its atmosphere.

Our first close-up glimpse of planet Mars was from Mariner 4 in 1965, and revealed a terrain covered with craters. Mariners 6,7, and 9 also reached the red planet, returning information on its composition and photographs of its two moons.

The Mariner 10 mission was the last in the Mariner sequence, and visited both Venus and Mercury.

Mariner 10 was launched on Nov. 3, 1973, intended as a flyby of planets Venus and Mercury. It passed Venus in February of 1974, returning over 4000 photographs of it's thick cloud cover and information...more