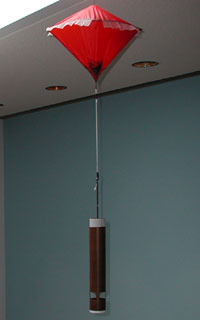 Radar measures wind speed and spots rainfall. It can also measure the sizes of water droplets in clouds. LIDAR is like radar but uses laser light instead of radio waves. LIDAR measures tiny aerosol particles and the "edges" of clouds.

Radiosondes and dropsondes carry instruments that measure pressure, altitude, temperature, humidity, and wind. They are lifted into the sky on balloons or dropped on parachutes from airplanes.

Cameras on airplanes and satellites take pictures of clouds and the sea surface. Radiometers measure the amount of sunlight reflected from cloud tops. They also measure infrared radiation coming from different levels in clouds and the atmosphere. They can find out how much light can pass through clouds. Spectrometers measure chemicals in the atmosphere and in aerosols.

Instruments towed by ship measure temperature, saltiness, and pressure in the ocean. A special kind of sonar collects data on ocean currents.