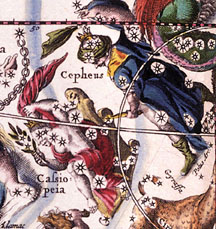 The constellation of Cassiopeia is one of the most famous in the sky. It is very easy to identify the stars that are part of it because they have the shape of a W.
Cassiopeia was the daughter of Arabus, a son of Hermes, who gave his name to the country named Arabia. Cassiopeia was also the ostentatious wife of Cepheus, the king of Ethiopia.

She was so proud of her beauty that once she declared that she and her daughter Andromeda were more beautiful than the sea nymphs, the Nereids. Offended, the nymphs complained to the sea god Poseidon, who avenged Cassiopeia's offense by sending a sea monster and a flood to destroy Cassiopeia's land. In despair, the king consulted the oracle of Ammon about how to prevent the destruction of his kingdom.

The oracle predicted that only the sacrifice of the king's daughter to the monster could appease Poseidon's wrath. Andromeda was chained naked to a sea cliff. Fortunately, at this same moment, Perseus , the nephew of the king of Argos, was traveling along the coast. Perseus noticed the beautiful Andromeda chained to a cliff and immediately fell in love with her.

Nearby, Andromeda's parents waited, resigned to their daughter's fate. Perseus approached them and learned of the impending peril. He promised to save Andromeda and marry her. Perseus'courage prevailed against the monster, and the marriage could finally be celebrated. It is said that the sea god Poseidon placed the figure of Cassiopeia among the stars to remind people of her vanity.