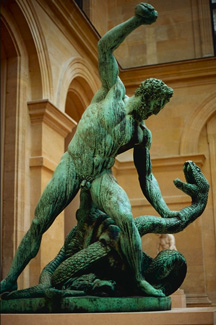 Heracles was the son of the sky god Zeus and the queen of Tiryns, Alcmene. When Hera discovered Zeus' infidelity, she decided to kill the child born from the Zeus' relationship with Alcmene. That child was Heracles. Hera placed two serpents in Heracles' cradle, but the child strangled the snakes with his bare hands, clearly revealing his divine nature. This and many other heroics made Heracles famous throughout the ancient world.

Hera was so annoyed at Heracles' growing fame that she cast a spell of madness over him. Out of control, Heracles killed his own wife and children. His remorse was so profound that when he returned to his senses he could find no peace of mind. He visited the oracle of Delphi to see how he could demonstrate his remorse.

The oracle advised him to obey the orders of Eurystheus, the king of Tiryns and Mycenae. Eurystheus ordered Heracles to accomplish twelve difficult tasks (the so-called Twelve Labors of Heracles). Heracles completed the twelve labors and is celebrated to this day for his great courage and strength.