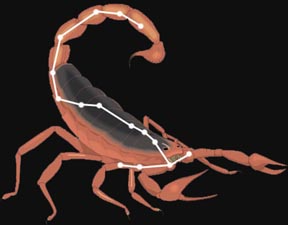 To the ancient Greeks, the constellation Scorpius was the image of a scorpion. The constellation was related to the death of the giant hunter Orion by an enormous scorpion. There are several different stories about Orion's death. According to one variant, Orion once met the goddess of the chase, Artemis while he was sailing to the island of Crete.

Artemis loved hunting as well as Orion. They began hunting together and enjoying each other's company. Orion became so infatuated with Artemis that he tried to rape her. The goddess avenged herself and set a scorpion on him. No matter how hard he tried, Orion could not defeat the scorpion.

In a similar story, Orion was planning to kill all the animals. This made the goddess Gaia very angry because she created them. Gaia sent the giant scorpion to kill Orion. A different version says that Orion escaped the scorpion by swimming out to sea. However, at the same time, Apollo dared Athena to shoot a black dot in the ocean. Athena did not realize it was her lover, and shot Orion with an arrow.