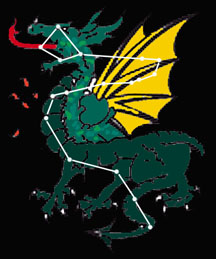 The constellation, Draco the Dragon, plotted over a dragon.
Click on image for full size
Chris Gleason, Windows to the Universe original

Learn more about the constellation, Draco the dragon

Draco the dragon is famous throughout mythology. This great beast was especially present in greek myth. One of the more popular stories involves Heracles and the twelve labors. Gaia gave Hera a golden apple tree when she married Zeus. Hera put the tree in the garden to be guarded by the Hesperides and a dragon called Ladon. At this point, the story has different versions.

In one, Heracles slays the dragon with poison arrows and gathers the fruit. In another, Heracles asks Atlas to gather the apples while he and Athena held up the sky. Atlas, thinking he could trick Heracles into holding the sky forever, gladly accepted the mission. When he returned with the apples, Heracles slipped the sky back on Atlas' shoulders again. Atlas was not only stuck with the sky, but he also lost his apples.

Yet another story is set during the Titan war with Zeus. Athena was attacked by a dragon. She flung it into the air, wrapping it around the pole. To this day, the dragon remains in the night sky.

The constellation, Draco, can be found revolving around the celestial North Pole. This type of constellation is said to be circumpolar. The head is slightly north of Hercules, while the tail ends between the Big and Little Dippers.