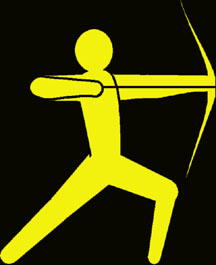 The ancient Greeks saw the figure of the Greek myth, Orion, in the nighttime sky. There are many different stories about how Orion's figure was placed among the stars. Orion was an handsome and skillful hunter. Once, he went to the island Chios where he fell in love with Merope, the daughter of the king Oenopion. Oenopion promised Orion his daughter if he could rid the island of the fierce beasts that infested it.

However, after Orion had successfully completed this perilous task, the king refused to give up his daughter. Orion was so angry that he got drunk and raped Merope. But, Oenopion avenged his daughter. He waited until Orion fell asleep and put out Orion's eyes. Orion's fury grew out of control. He learned from an oracle that he could regain his sight if he went in the farthest point in the east where the sun rises from the ocean. With the help of a young guide, Orion followed the instructions and arrived in Delos.

There, the goddess Eos fell in love with him and convinced her brother, the sun god Helius, to restore Orion's sight. Orion tried to find Oenopion to avenge himself. While pursuing Oenopion, Orion reached the island of Crete where he met the goddess Artemis. Artemis was an excellent huntress. She convinced Orion to go hunting with her and abandon his quest for vengeance.

Artemis'brother, Apollo knew of Orion relationship with Eos. In addition, he was not pleased with Orion's vow to kill all the earth's wild animals. So, Apollo persuaded the Earth goddess Gaia to set an enormous scorpion on Orion. Orion soon realized that his strength and sword were no match for the mighty scorpion. He dove into a lake and swam towards Delos, where Eos could help him.

While he was swimming out (too far to be recognized) Apollo called Artemis, and pointing to Orion's head, challenged her ability to hit any object that far out to sea. Artemis took aim and succeeded. She soon realized that she had killed her lover. In a state of intense grieving, Artemis placed Orion's figure among the stars.