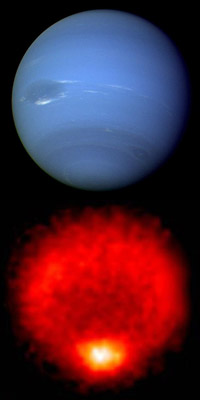 The top picture shows Neptune as our eyes would see it. The bottom picture is infrared "light", which shows heat. The bright spot at the bottom of the IR image shows that Neptune's South Pole is the warmest place on the planet!
Click on image for full size
Images courtesy of NASA/JPL (visible light) and VLT/ESO/NASA/JPL/Paris Observatory (infrared).

The South Pole of the planet Neptune is a bit strange. Triton, Neptune's largest moon, also has interesting poles.

Neptune is tilted on its axis by about 28°. That isn't so strange... Earth is tilted, too, by a similar amount of 23°. That means Neptune's poles take turns being in sunlight or in shadow. So Neptune has seasons, like Earth. However, Neptune takes roughly 164 years to orbit the Sun once. That means each season on Neptune lasts more than 40 Earth years! It has been summertime in Neptune's Southern Hemisphere for the last few decades. Sunlight has been warming Neptune's South Pole for many years. The South Pole of Neptune is the warmest place on the planet!

Triton was discovered by W. Lassell in 1846. Of the 8 moons, it is the 2nd farthest from Neptune. Triton may be one of the largest of the icy moons with a diameter that is about half the distance across...more

Triton is the largest moon of Neptune. It is a very odd moon. The poles of Triton are especially interesting. Triton has a polar ice cap at the South Pole. Earth has ice caps at its poles too. On Earth...more

Neptune has // Call the moon count function defined in the document head print_moon_count('neptune'); moons. It also has rings, but its rings are different from Saturn's. Neptune's largest moon is named...more