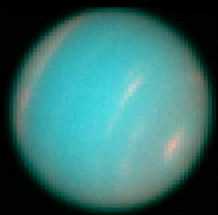 This is an image of Neptune's current Great Dark Spot.
Click on image for full size
NASA/STScI and Dr. Heidi B. Hammel

This image shows the new Great Dark Spot of Neptune, which was discovered using the Hubble Space Telescope. The image shown here, shows a large "hole" in the clouds of Neptune in pink, in the northern hemisphere, in the bottom right corner of the picture. (The north is on the bottom in this image, because telescopes always invert the object that is being viewed). This hole is where the new Great Dark Spot is.

The Voyager image from 1989 of the Great Dark Spot, shows a much nicer picture than the present images taken by the Hubble telescope. This is because the planet Neptune is very far away, and Voyager, on its discovery mission, was very, very close to Neptune.

The Source of Heat from Within Neptune

The picture shows places on Jupiter which are hot. Jupiter is a very warm place, as shown in the picture, sort of like a warm log in the fireplace which gives off heat. Like Jupiter, Neptune also gives...more